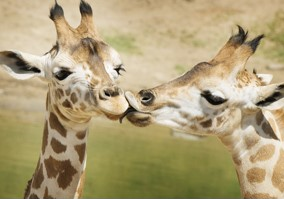 In the wild, male giraffes are the love ‘em and leave ‘em type. “Adult male giraffes in the wild are solitary,” says Josh Shandera, a hoofstock keeper at Omaha’s Henry Doorly Zoo and Aquarium. “They come and go from the herd, breed with a few females, and then go off on their way again.”

Giraffes in human care generally aren’t such players – and they’re not ageist. Jawara, a nine-year-old male giraffe at the zoo, has already bred twice with 18-year-old Dottie to produce Lolo (3) and Malcolm, who will be a year old in April.

Their matchmaker is the Species Survival Plan (SSP), which oversees the population management of select species for member organizations of the Association of Zoos and Aquariums so that the genetic diversity of that species is maintained.

Not all of giraffe pairings are regulated by the SSP, though. The combined genetics of Layla and Sam, the parents of Penelope who was born at the end of 2017, were not specifically needed at this time in the AZA population of animals. The keepers bred them because Malcolm will probably be moving to another zoo eventually and they want to sustain the herd’s numbers.

Many of the other female giraffes are currently a bit too young to breed, with the exception of Betty, who had already tried unsuccessfully to breed with Sam.

As for Dottie, Malcolm will probably be her last calf. “At 18, she can still become pregnant, but as they age it gets harder on them,” Shandera says.

That’s something many human parents can relate to as well!