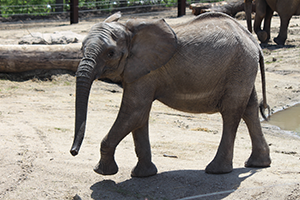 "She thinks she’s all that and a can of tuna," says Ellen Wright of one of the young, female elephants that have recently arrived at Omaha’s Henry Doorly Zoo and Aquarium.

When Wright, a longtime patron of the Omaha Zoo Foundation and zoo volunteer, was given the opportunity to sponsor and name an elephant through the capital campaign for the African Grasslands project, she immediately went online to find a suitable moniker. "It needed to be short for training purposes, and I wanted it to be African."

She settled on Omma, which means eyes of heaven. "I asked (Omaha Zoo Foundation Executive Director) Tina Cherica about their personalities and she said that one of the little girls was kind of a handful, very curious and animated. I said, 'that’s the one I want to name!'"

Wright didn’t meet Omma right away because all six of the new elephants had to go through an intense quarantine process upon arrival at the zoo. This was both to ensure that they hadn’t brought any parasites or diseases, and also to get them acclimated.

When the two did finally meet, Wright says she was impressed with how much care had been taken to ensure the elephants were adjusting to their new environment. "The people who have been brought in to care for these animals are not only brilliant, they’re kind. We met a man who has been with the elephants since day one, working with the psychological and social aspects of their transition to make sure they’re not depressed, but happy and mentally stimulated," she says.

Now that the elephants are on display, the emphasis on their psychological and physical well-being continues. "They have enrichment walls that enable the elephants to stretch their necks to get food, and equipment on timers that drops down food, and foliage and toys throughout the day so that they’re constantly working their bodies and their minds," says Wright.

Having been on safari with the Omaha Zoo Foundation twice (and about to embark on a third trip), Wright says that the nature preserves and guides she’s encountered in Africa are very appreciative of the zoo’s efforts to save these elephants and provide a rich life for them. In their native Swaziland, a state-of-emergency drought is causing severe health risks to both people and wildlife, with many elephants starving to death, being euthanized or poached.

"To be able to save 17 elephants and bring them to the U.S. is very significant," says Wright of what inspired her to sponsor Omma. "It’s a dream come true to have elephants back in Omaha and in such an incredible facility. We are lucky, and our elephants are lucky too."