The Road to Two Million Trees in Madagascar 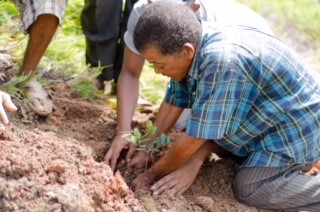 By early August, the Madagascar Biodiversity Partnership (MBP), which was founded by Dr. Edward E. Louis Jr., Director of the Conservation Genetics Department at Omaha’s Henry Doorly Zoo & Aquarium, had planted one tree in Madagascar for each of Nebraska’s 1.92 million residents. By the end of August, the number of trees planted will have reached two million.

For supporters of the zoo who remember celebrating the one million tree milestone, which was five years in the making, in early 2017, the speed at which the MBP has nearly doubled their progress is breathtaking.

“With a project like this, every time you hit a big goal, you have the chance to publicize it in the community and build excitement,” explains Dr. Cynthia Frasier, a scientist in the zoo’s conservation genetics program who assists the MBP. “Once we planted one million trees, there were more people in the communities who wanted to plant and potential funders took notice as well, so we’ve been able to more than double our infrastructure.” 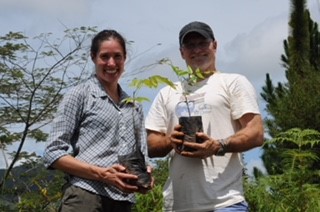 Growth has not been without its challenges. After generations of looking the other way in regards to slash-and-burn farming and lemur-hunting, the Malagasy government is now enforcing protections in the protected areas. “That’s great news for the animals, but really hard for the communities who use those resources,” Frasier explains. “People didn’t realize that these areas were off-limits until they were arrested – and the jail term is 25 years.”

The MBP enlisted Brittani Robertson, a graphic designer who works in the zoo’s Conservation Genetics Lab, to put together an infographic that would help locals understand the new policy and its repercussions, and they partnered with local authorities on a public awareness campaign.

From the very beginning, Dr. Louis has balanced the welfare of the Malagasy people with protecting the nation’s precious biodiversity. “The MBP recognizes that if we want to keep these resources there, we must give the Malagasy people alternative ways to live and feed their families,” Frasier says, explaining that the path to development for many nations has historically included the exploitation of natural resources. “But Madagascar, like other developing nations, is on an unchartered course where they are pressured to preserve their forests while struggling to be a global participant.” 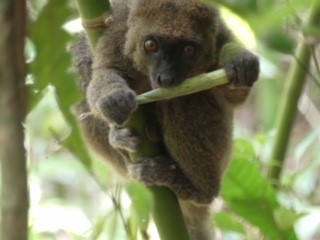 Dr. Louis estimates that about 40-50 percent of working Malagasies in just one of the four areas of the country in which the MPB operates directly benefit from its programs and that number continues to grow. Employees are paid a fair day rate and are also eligible for credits that can be cashed in for items such as sewing machines, biofuel efficient stoves, backpacks, boots and solar panels. Women can bring their children to the community planting events, allowing them to grow up with the reforestation effort constantly progressing around them. The goal is for these children to participate in protecting the forest when they are adults.

Now operating in four different habitats, each with its own needs and challenges, throughout Madagascar, the MBP is constantly being invited into other communities. “The communities are starting to trust us,” Frasier says. “But we don’t take that trust lightly. If we’re going to go in to a community, we need to be sure we can meet each other’s needs and they will be able to sustain the operation eventually.”

Frasier says that none of this would be possible without the financial support of Omaha Zoo Foundation patrons, as well as grants and financial contributions from other organizations and AZA zoos. Individuals can also help by being conscientious consumers, such as looking for forestry-certified products and asking where tropical hard woods are sourced. She adds that social media is also a game changer. “The more ‘likes’ we have on Facebook, and the more followers on Twitter and Instagram, the more it helps us get people interested in the project.

So far, that’s added up to millions of trees and thousands of people employed in a nation halfway across the world, all thanks to the support of people in Omaha. “Just when you think you're at the top of your game, it means it’s time to aim a little higher,” Frasier says.